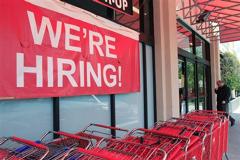 Applications for unemployment benefits jumped 25,000 to a seasonally adjusted 429,000 for the week ending April 23, the Labor Department said Thursday. That’s the highest total since late January.

The four-week average of applications, a less volatile measure, rose to 408,500, its third straight rise and the first time it has topped 400,000 in two months. Applications near 375,000 are consistent with sustained job creation. Applications peaked during the recession at 659,000.

“Given these technical factors, we are inclined to dismiss the recent backup,” said Carl Riccadonna, an economist at Deutsche Bank Securities. “We will be looking for claims to move back below 400,000 in early May.”

Other analysts were more slightly more concerned. Ryan Wang, an economist at HSBC Securities, noted that the four-week average has increased by 20,000 in the past month.

“Minor seasonal distortions are not a good reason to dismiss the underlying increase in jobless claims,” Wang wrote in a note to clients. “This is a big enough increase to merit some concern about the direction of employment growth going forward.”

Some analysts have predicted that auto factory shutdowns, stemming from supply disruptions in Japan, would cause applications to rise. But a Labor Department analyst said only one state reported auto-related layoffs and the increase was modest.

Economic growth slowed sharply in the first three months of the year, according to a separate report Thursday from the Commerce Department. Rising gas prices cut into consumer spending, bad weather delayed construction projects and the federal government cut defense spending by the most in six years.

The economy grew at a 1.8 percent annual rate in the January-March quarter, a much weaker pace that the 3.1 percent growth in the previous quarter. But economists say the slowdown is mostly the result of high gas prices and other temporary factors. They expect gas prices will stabilize and growth will exceed 3 percent pace for the rest of this year.

Unemployment benefit applications trended down for about six months, but have leveled off in recent weeks. Still, other recent evidence shows that businesses have stepped up hiring. Companies added more than 200,000 net new jobs in February and March, the fastest two-month pace in five years. The unemployment rate fell in March to 8.8 percent, down a percentage point in one month.

The Fed has kept short-term interest rates at a record low level of near zero since December 2008. It is also buying $600 billion in Treasury bonds in another effort to lower interest rates. Both moves have spurred criticism from some members of Congress that the low interest rates could spur higher prices.