Where do you fit in?

New data from the Bureau of Labor Statistics’ American Time Use Survey lays everything out. For days that Americans work, here are some highlights:

*For people employed full time on days they worked, 2015.

While these averages have shifted over the years, there are still some notable differences between how men and women use their time.

The survey captures much more detailed information than is presented here. For example, the primary way most Americans relax is by watching television, at 2.8 hours per day. For people 15 and older, watching TV accounted for more than half their leisure time. The next most common way to unwind? Hanging out with friends or heading to a social event took up 41 minutes per day, on average.

Explore all of the data at bls.gov/tus. And let us know if this looks like your average day!

Author Megan Kindelan is a public affairs specialist for the Labor Department at the Bureau of Labor Statistics.

Although Governor John Kasich signed legislation earlier this month to legalize the use of medical marijuana, BarryStaff stands with many other businesses across Ohio in announcing its substance abuse policy will not change.

“We’re looking out for our clients and our employees when we say the use of marijuana is not OK,” said BarryStaff President Doug Barry. “We wouldn’t want an employee to be working under the influence of Vicodin. Medical marijuana is no different. If employees test positive, they will not work for BarryStaff.”

The Ohio Chamber of Commerce advocated for certain protections for employers – protections BarryStaff has embraced. As the agency states on its website, “The bill allows an employer to discharge, refuse to hire, discipline or take adverse employment actions against an individual with respect to tenure, terms, conditions, or privileges of employment due to the individual’s use, possession, or distribution of medical marijuana.”

Employers simply do not need to accommodate an employee’s use of medical marijuana.

Bob Dunlevey, an OSBA board certified labor and enforcement law specialist, said “Even if marijuana is prescribed by a physician to treat a disability recognized under the American with Disabilities Act and even if the marijuana is used during off-work time, these employees will be terminated for testing positive. It is not a violation of the ADA for an employer to refuse to accommodate the medicinal use of marijuana.”

BarryStaff puts clients and employees first. The welfare of both parties is of paramount interest to the company. These priorities ultimately reinforced its long-administered substance abuse policy. 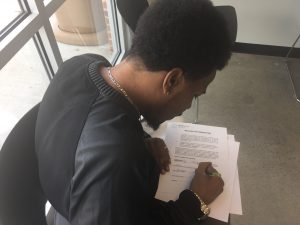 BarryStaff opened its Springfield branch in 2015 and expectations for a job fair in mid-June were somewhat tempered. Did people know about the new office? If not, were they willing to find it?

There was nothing to worry about.

The job fair, held June 8, was more successful than BarryStaff ever imagined. More than 50 percent of the applicants interviewed were qualified to fill oft-needed positions at Clark County area companies.

Roughly 25 people interviewed over the span of a few hours.

BarryStaff is currently in the midst of planning another job fair, this time at the company’s headquarters in Dayton. Details will be released as plans are finalized.

BarryStaff is happy to announce the hire of Andy Sedlak as communications director.

In the age of social media and digital marketing, this represents a first for the 32-year-old BarryStaff.

“We are excited to add Andy to the team,” said President Doug Barry. “His skills will allow BarryStaff the ability to increase our level of service to clients.”

Sedlak, after previously working in television news, newspapers and radio, said the opportunity to work on behalf of BarryStaff excites him.

“This is a great organization with a terrific heritage and an admirable commitment to the Dayton area,” he said. “I look forward to meeting our clients, our employees and those of you in the media I haven’t gotten to know yet.”

Sedlak can be contacted about reserving BarryStaff’s Community Room for off-site work retreats, community events and information about the local manufacturing industry.  His email address is andy@barrystaff.com.

BarryStaff is pleased to announce a milestone in its commitment to the downtown Dayton area.

Ground was broken on the new facility in December 2014. The 32-year-old business is proud of its downtown Dayton heritage, having operated from three other downtown locations since 1982.

“Our new facility has allowed us the space to better serve our applicants and expand our services to our clients,” said President and CEO Doug Barry.

The Pam and Warren Barry Community Room also opened in 2015. To date, more than 50 businesses and organizations have requested to utilize the room for off-site retreats. With enough space for 80 people, white boards and an exquisite view of downtown Dayton, BarryStaff is proud to serve business professionals on its home turf. 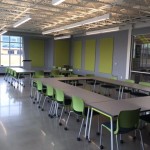 “It’s a great room to get some thinking done.”

Ohio is popularly known as the Buckeye State. Reason….? The buckeye trees which are spread throughout the Ohio River Valley. These trees produce small brown nuts resembling the eye of a deer; and hence the name buckeye. Bonus fact: carrying one in your pocket brings good luck.

2. One and only Presidential Museum

Ohio is home to the “One and Only Presidential Museum” which honors John Hanson and eight others, who were elected and served one year terms before the Constitution was written. This being said John Hanson, technically becomes the first president of the United States.

Ohio State has been nicknamed “Mother of Modern Presidents,” as Ohio is the birthplace of seven U.S. presidents: Ulysses S. Grant, Rutherford B. Hayes, James Garfield, Benjamin Harrison, William McKinley, William H. Taft and Warren G. Harding. Two Ohio presidents: Grant and McKinley are portrayed on the US Currency, which is kind of a big deal, don’t you think.

No! This isn’t a joke. The Cuyahoga River has caught fire at least 13 times and is therefore nicknamed “The River That Caught Fire.” It was one of the most polluted rivers in the country and would easily catch fire when sparks from the train would fall into the water. Only after elaborate media coverage it was cleaned up in 1969.

The Glacial Grooves on Kelleys Island is a National Natural Landmark. It is considered to be the largest and most easily reachable such groove on this planet. It is quite amazing to see scratches and grooves on the bedrock left behind by the great ice sheet that covered part of North America 18,000 years ago, as it dragged over the surface.

6. The birthplace of aviation

Ohio is considered as “The Birthplace of Aviation.” The Wright Brothers, credited as inventors of the first airplane hailed from Dayton.

Ohio is home to 24 astronauts. Why so many? Role models such as Senator John Glenn, the oldest man to travel into outer space (“the first all Ohio crew”) and not to forget, Neil Armstrong, the first human ever to walk on the Moon have been inspirational for the buckeyes.

Sounds gross right…? But it actually is pretty cool. A couple from Philo, Ohio has made a house completely out of trash and it turned out to be amazing. The idea was to show how much can be made out of recycled material and the couple nailed it. The house has now been opened up for tours.

9. Company in a basket

Longaberger Company takes the cake when it comes to being unique. Longaberger Company, a manufacturer of wood baskets and lifestyle products, Newark has its corporate office in the world’s largest basket. Today, it not only functions as the headquarters of the company but is a tourist attraction too. Thousands of fans flock to Newark every year to get a glimpse of the basket.

Would you believe it if I say that there’s a bridge which you can cross and still be on the same side of the river? Well believe it or not, the Y Bridge in Zanesville is one such bridge. It was opened in 1814 to span the confluence of the Licking and Muskingum Rivers and has been reconstructed four times at the same place.