By Joe Kaeser, President and CEO of Siemens AG.

There is a widely held view about what is coming in manufacturing. It goes something like: Move over, humans. We don’t need you anymore. Robots will take it from here.

But it isn’t true. This is not manufacturing’s future.

People have feared the march of the machine for centuries. Yet for just as long, machines have changed work; they have not replaced it. And the emerging fourth industrial revolution — even with its digital, automated assembly lines — is not an exception to this trend. As this new way of doing business becomes a reality, humans and machines will each play a critical role in manufacturing’s success.

Here are a couple reasons why.

First, it is true that digital manufacturing does cut out the middle-man. More and more routine, repetitive assembly tasks will be taken over by machines. But as certain jobs disappear, new ones open up in other parts of the factory. Germany in many ways exemplifies this trend. Today, German manufacturers deploy three times more robots than U.S. companies, but they also still employ more humans. Relative to the size of our economies, German’s manufacturing workforce is twice the size of America’s.

Second, from its very beginning, the fourth industrial revolution has never presented manufacturers with an either-or choice — robots or humans. It has always been about combining the talents of both. Ultimately, it is the convergence of artificial and human intelligence that will enable manufacturers to achieve a new era of speed, flexibility, efficiency and connectivity in the 21st century. Machines have the ability to assemble things faster than any human ever could, but humans possess the analytics, domain expertise and valuable knowledge required to solve problems and optimize factory floor production.

This is precisely what we now see at Siemens’ Amberg Electronics Plant in, yes, Germany. Over the past 25 years, Amberg has evolved into a fully digital plant, with automation rising tremendously. But what has changed the most during this time isn’t the number of employees; what has changed is productivity. The same size workforce — about 1,200 workers who have been trained and retrained for digital manufacturing — has increased productivity by more than 1,000%.

For now, Amberg is something of an exception. But it won’t be for long.

Where we are now is only beginning. Artificial intelligence is here and being rapidly commercialized, with new applications being created not just for manufacturing, but also for energy, healthcare and oil and gas. This will change how we all do business. There has never been a bigger opportunity for us to add value for customers — and that’s what makes this new machine age unstoppable.

At the same time, companies have both a business need and social responsibility to be equally invested in humans. The transformation of the factory floor must be met by a large-scale, company-led commitment to industrial reskilling for current and aspiring employees. The responsibility is now ours to ensure that digital manufacturing is accessible to anyone willing to learn, work hard and pursue new pathways in training.

Germany has long confronted the human challenge with a dual system of education — a public-private system that invests in, promotes and continuously updates training and educational pathways to established and growing industries. Participants attend public vocational schools while receiving on-the-job training on industry standards through a paid apprenticeship in a private-sector company.

This system also serves a dual purpose to both business and society: companies win by having a strong pipeline of workers with relevant skills and knowledge; society wins as young people gain fast tracks into good-paying jobs and exciting careers with ladders to climb, increasing economic opportunity and strengthening the middle class.

Industry leaders just have to remember that, while robots are programmable, with humans, trust is earned. We have to prove that digital manufacturing is inclusive. Then, the true narrative will emerge: Welcome, robots. You’ll help us. But humans are still our future.

Click here to read the original article published by Time.com. 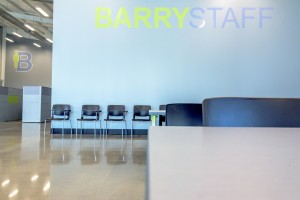 Business owners often seek to control the perception of their companies so that they accurately reflect reality. This is easier said than done. Perceptions are like habits – they tend to die hard. The staffing business has long battled a sometimes lackluster perception. At BARRYSTAFF, here are the most common misconceptions we run into … and how we set the record straight.

“Temporary” employees are nothing more than short-term fixes. In truth, the term “temp” is outdated. We no longer refer to ourselves as a “temp agency,” but rather as a “staffing company.” There’s a significant difference. Gone are the days when folks would show up to the local agency each morning and collect a paycheck for a single job later that afternoon. In reality, what we’re doing is probably much different than what people are prone to imagining.

We give companies employees to try out on a limited basis. If an employee is working out then companies may extend a permanent job offer after 90 days. We handle everything until that job offer is extended. This process allows the company – and the employee – to feel each other out. One of the key analytics we study is our retention rate. In other words, we want our companies and employees to stick together. That’s our goal.

We only staff for one industry. While it’s true that staffing companies have specializations (BARRYSTAFF’s is manufacturing), many agencies are capable of recruiting for many, many fields. At BARRYSTAFF, we have placed architects, engineers and chemists. We have an entire team solely dedicated to filling clerical positions. So while manufacturing is our wheelhouse, we’ll never turn away someone looking for a communications position. Or graphic design. Or IT. We can help them too.

Job seekers have to pay to use our service. Job seekers pay nothing. Zero. Zilch. That’s not how we make money. Instead, the companies we partner with pay us to help them find quality employees. No job seeker will ever need to pay a dime to a company like BARRYSTAFF.

We only offer dead end jobs. The fact of the matter is that there is plenty of room for advancement in the jobs we hire for. Many of our placements have gone on to management positions.

We only work with struggling companies (Why else would they need a staffing company?) This is one we have to push back against fairly often. We work with big companies and small companies. Some are international. Others are hyper local. They use us because it is time-consuming to search, interview and drug screen candidates. It’s expensive. It cuts down on production. Advertising alone can run up a hefty tab. And these days, the job search is changing drastically from year to year. We live in a fast-paced digital world now, and our clients need to stay focused on what they’re doing. More of them are trusting experts like BARRYSTAFF to handle this work. It’s a specialized service during a time of rapid change.

And our services don’t stop at staffing. We often find ourselves working as a fully- functional HR branch for companies. It’s just another amenity we’re proud to offer.

Settling into a new job can be tricky IRL – and straight up confusing online.

A 2012 Millennial Branding Survey found young adults become Facebook friends with an average of 16 of their coworkers, but research suggests we should connect at our own risk.  After all, more than half of surveyed workers (51%) said social shows them too much information about their coworkers, according to a recent Pew Research report. And 29% of employees ages 18 to 29 found something on social media that lowered their professional opinion of a colleague.

But the rules of online engagement keep changing as more of us use social networks to actually, you know, network. “Ten years ago, it was taboo to friend your coworkers,” said Winnie Sun, a financial adviser and consultant on Millennial matters. “But nowadays, we’re all building our personal brands and making these connections.”

So Sun and Leonard Kim, a personal branding expert and author of “The Etiquette of Social Media,” spoke to Moneyish about the dos and don’ts of linking with colleagues online.

DON’T: FRIEND ABOVE YOUR PAY GRADE. That means your boss and your company’s C-Suite are off-limits. “You want them to respect you professionally so you can progress forward in your career,” said Kim. But seeing your casual conversations or pictures of you in a bathing suit can shatter that professional image. “And recovering what was lost from that level of respect is going to be quite difficult,” Kim said, who added that colleagues in the same position as you, or who work outside of your department, are more fair game.

The exception to this rule is LinkedIn. “LinkedIn is the same as if you walked into your new office building, and started going up to people and saying, ‘Hi, I’m working here now, and I’m excited to come on board,’” Sun said.

DO: USE THIS ‘MEAL TEST’ FOR HELP. Different social networks suggest different levels of intimacy. LinkedIn and Twitter are ways to introduce yourself, share industry news and support others in your field. “But Facebook and Instagram are like going out to lunch and dinner,” said Sun, where you’re sharing pieces of your personal life like news about your kids and your pets, or pictures from your vacation. “Snapchat is happy hour,” she added. “If we’re close enough to grab drinks and cut loose a bit, then we can connect on Snapchat.” And don’t send friend requests to colleagues with private pages – that’s a clear indicator they don’t want to mix business with pleasure.

DON’T: FRIEND REQUEST PEOPLE YOUR FIRST DAY ON THE JOB.  If you haven’t had lunch or a conversation with colleagues in real life, it’s off-putting to friend them online. “The time frame for connecting with them [online] is after you build a personal bond. I’d recommend a minimum of one, but at least two months,” said Kim. “Following someone on Twitter is a lot less creepy than immediately adding someone on Facebook.”

DO: TEST THE WATERS WITH LINKEDIN. If someone green lights your connection request on LinkedIn, it opens the door for stronger social media relationships later. “If they accept, send a quick note saying, ‘Thank you so much for connecting. I’m excited to come on board,’” said Sun. “And if they respond to that … you know that person has a warmer personality.” And if the conversation continues, Kim suggests writing back after a few months to say that you might send him or her a Facebook invitation to continue networking, and take it from there.

DO: LOOK AT YOUR CONTENT. Are you really comfortable with coworkers seeing your posts? If you use Facebook and Twitter for business, like posting industry news and insights, then adding your coworkers makes sense. But you don’t want to give professional peers access to Snapchat or even Instagram and FB pages where you’re sharing provocative pix or posting statuses where you argue, put people down or suffer emotional breakdowns.

Click here to check out the original article on Moneyish.