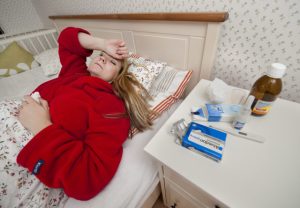 When Elle Fraser, a business operations assistant for the New Jersey Devils, came down with the flu just before Thanksgiving last year, she didn’t think about staying home from work.

The hockey team had home games on Wednesday and Friday that week, and she worried that her work would never get done without her, even if she had a 103-degree fever.

She toughed it out, alternating between chills and sweats, falling asleep at her desk, wiping down every surface she touched, and insisting to co-workers she was wearing mittens to handle tickets only because she was cold.

On that Wednesday, Ms. Fraser, 23, worked from 8 a.m. to 9 p.m. On Thanksgiving Day, she slept most of the day. The next day, she went back to work, just as sick as she was on Wednesday.

Sure, she technically had a choice to use a sick day and stay home, but that was not how she saw it. She thought she didn’t really have a choice.

“Nobody tries to convince you to go home because they knew in that situation they’d be doing the same thing,” she said.

Some people might read her account as a tribute to hard work and selflessness. Others might be aghast that she had risked exposing others to illness.

It’s clear on which side doctors come down: They say workers with the flu or a cold should use sick days far more often than they do. Though millions of Americans don’t get paid time off when they’re sick, those who do have the option often don’t take it.

“If it’s bad enough that you’re wondering if you should stay home, you should probably stay home,” said Dr. Pritish K. Tosh, an infectious diseases researcher at the Mayo Clinic in Rochester, Minn.

When, and how long, should you stay home?

Remember: It’s not just about you.

Even if you can battle the flu by enduring a miserable week, it can be deadly for others, especially pregnant women, young children and older people. And no matter how many precautions you take, there’s no way to eliminate risk to people around you.

As a general rule, Dr. Tosh suggested people stay home until they are fever-free for 24 hours. He said he stayed out of work for three or four days the last time he had the flu.

“People can be infectious even before they start to have symptoms, but most of the time that they’re going to be most infectious is going to be when they are sickest, especially if they’re having fevers,” he said.

Infectious germs are spread most frequently by airborne “respiratory droplets” from sneezing and coughing. The flu virus can last for up to 24 hours depending on the surface, Dr. Tosh said.

Get the best of Well, with the latest on health, fitness and nutrition, delivered to your inbox every week.

By coughing or sneezing into your hands, or wiping a runny nose, your hands can spread the germs to everything you touch — including surfaces many other people touch, such as door knobs, elevator buttons or shopping carts.

“You’re never truly not contagious until all of those symptoms are resolved,” said Dr. David Shih, executive vice president of strategy, health and innovation at CityMD, which runs a chain of urgent care centers in New Jersey, New York and Washington.

How can you limit the exposure to others?

Let’s say you’re ignoring the doctors and going out into the world anyway.

Though you can’t eliminate the risk of infecting others, there are steps you can take to minimize it:

• Get in the habit of coughing and sneezing into your elbow, not your hand. Children are being taught to cough like Dracula.

• Limit your interaction with other people as much as possible. If you’re going to work, consider skipping nonessential meetings.

• Wipe surfaces down after touching them.

• Use hand sanitizer or wash your hands after coughing or sneezing.

• Wear a mask to limit the respiratory droplets.

• Take medication to reduce your symptoms.

Oh, by the way, get your flu shot.

What about people who don’t have sick days?

Stay-at-home parents scoff at the idea of sick days, as do millions of other workers whose jobs don’t offer paid time off.

“For people who are living paycheck to paycheck or have significant debt, the risks of staying home and losing pay or potentially losing their job are far too great,” said Vicki Shabo, vice president for workplace policies and strategies at the National Partnership for Women and Families.

Low-income earners and part-time workers are especially likely to work while sick, including those at restaurants and hospitals. Ms. Shabo and advocates like her are pushing for laws mandating paid sick days, which are in place or will be soon in eight states, 30 cities and two counties.

“It’s important from a public health perspective, and a workplace morale perspective, that people can take the time they need to recover,” she said.

There’s nothing quite like the spine-tingling jolt of getting called in for a job interview after weeks of sending out your resume, crossing your fingers and mostly getting a bunch of canned emails thanking you for submitting your application in response. But that initial excitement can quickly turn to anxiety if you’re not prepared once you finally walk in the door.

As it turns out, interviewing in person is the most intimidating part of the job search process, according to a survey of 570 undergraduates and recent college grads by career site WayUp. The fear factor doesn’t end there either.

Once you sit down face-to-face with your interviewer, what’s the “scariest” question you could get asked? For nearly 41% of current undergraduates and 35% of recent grads who replied to the online survey conducted in October, it was: “Out of all the other candidates, why should we hire you?”

That question beat out four other choices, including, “What are your biggest strengths and weaknesses?” and “Where do you see yourself in five years?”

How to answer the toughest question

“Basically the entire interview boils down to this question,” Vicki Salemi, a career expert at Monster, said in a phone interview. Thankfully, making a case for why you’re the best fit for the job isn’t all that hard — so long as you’ve got your answer figured out in advance. “You need to be convincing and honest, but also have your talking points ready to go,” she added.

The best kind of answer achieves two goals: It demonstrates what you bring to the job, and it conveys your respect for and understanding of their business. The more precisely you can quantify your answers the better.

Here are a couple of sample answers you might give:

“Your company is a leader in industry X, and that is an area I excel in as well, as you can see from the fact that I have been the top sales person on a 10-person team also doing X for the last two years.”

“I’m a great fit for this position because it requires excellent project management skills, and I led the rollout of products X, Y and Z at my last job, which boosted revenue by 30% over the last year.”

If you’re new to the job market and don’t have hard numbers to quantify your skills, you can go with a softer approach, such as:

“You mentioned that attention to detail is a key aspect of this job. In my last job [or internship] at company Y, I got top marks for this in my reviews by doing A, B and C, which saved the company both time and money.”

And if the interviewer asks you about a skill you don’t have, you can get around that by using an example that shows you are a self-starter:

“I haven’t done that before, but I’m a quick learner. For example, in my last job at company Y, I learned the billing system in 2 days, compared to the full week it typically took new hires.”

The key here is to “know your unique value proposition,” which should be tailored to the job and the company, career expert Heather Huhman said: “If you don’t know it, you’re never going to be able to sell yourself to an employer.”