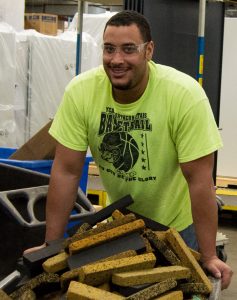 The manufacturing sector in the Miami Valley is recovering after a long decline, but this isn’t your father’s factory.

Automation and technology have displaced some workers while boosting overall productivity. More highly skilled workers are needed to operate, manage and maintain the high-tech equipment that is used in today’s manufacturing processes.

Here are five things you need to know about the manufacturing industry in the Gem City:

2. TECHNOLOGY Automation and technology have displaced some workers while boosting overall productivity. More highly skilled workers are needed to operate, manage and maintain the high-tech equipment that is used in today’s manufacturing processes.

3. SKILLED WORKERS The two manufacturing companies on our largest employers list — Honda and Crown — are both hiring. But to get the right workers now and in the future, both are partnering with educators from middle and high school, vocational schools and colleges.

Randy Niekamp, vice president of human resources at Crown, which manufacturers forklifts and other lift trucks, said the current labor market is “very competitive” and a far cry from the Great Recession a decade ago, when the company cut pay, laid off workers and froze benefits.

4. BENEFITING FROM A STRONG ECONOMY Materials handling “is very much buoyed by a strong economy” said Tom Jackson, a Philadelphia-based regional economist at IHS Markit, an information and insight company. “It’s not just manufacturing. It’s all the different distribution (companies). I know that’s been going wild in Ohio. Anywhere they’re moving stuff around you need things like forklifts to move it.”

5. AUTO MANUFACTURING CHANGES For the auto industry, that means coming up with ways to improve fuel economy through electrification — even though electric vehicles make up just 0.8 percent of vehicles registered in the U.S., said Stephanie Brinley, principal analyst at IHS Markit in Southfield, Mich.

Honda has worked with General Motors on fuel cell technology — which creates vehicle electrification using a chemical process — and Brinley said their first fuel cell stack will go into vehicles on the road by 2020.

Workers feel good about the economy because they value stability over wage growth.

One of the anomalies of the current U.S. economy is that workers seem more satisfied with it than economists are. It comes down to their view of the labor market: Workers are right to welcome its stability, and economists are right that wage growth is lacking.

Economists have two main data points in their favor. Wage growth is currently at about  3 percent, compared to 4 percent during the strong parts of the past two cycles. And the employment-to-population ratio for workers aged 25 to 54 still hasn’t returned to its high from the last cycle, let alone the all-time high from 2000.

Despite this “hard economic data,” the “soft economic data” — public sentiment — shows that the economy and labor market are perceived to be about as good as they’ve ever been. Gallup has been asking the public every month since 2001 what it considers the nation’s most important problem, and in November only 13 percent responded with an economic problem. The just-completed midterm elections were largely a referendum on health care and President Donald Trump, not on the economy.

Job market sentiment continues to outpace the hard economic data as well. The Conference Board’s monthly consumer confidence survey in November showed that 46.6 percent of respondents say jobs are “plentiful,” compared to only 12.2 percent who say that jobs are hard to get. The last time that differential was so great was during a two-year period from 1999 to 2001.

Given the choice between today’s labor market and 1999’s, I would take today’s. The labor market of the late 1990s was hot, but it was also unstable, fueled by speculative technology companies and investments. Today’s labor market may not be quite as robust, but what it lacks in strength it makes up for in stability.

As a worker, I’d rather be in a labor market with lots of job postings, a low level of jobless claims and a sustainable level of wage growth. It’s certainly preferable to being in one fueled by speculative excess, where I have to constantly worry about when the mania is going to collapse. I’ll take 3 percent wage growth today with good prospects for being employed tomorrow over 4 percent wage growth today and unemployment tomorrow.

There remains an unresolved debate about what central banks should have done in response to the dot-com boom of the late 1990s and the housing boom of the mid-2000s, two cycles marked by excessive speculation but acceptable levels of inflation. Were there ways to curb the excesses without harming the labor market or the economy at large? Given the lack of above-trend inflation, should the Federal Reserve have run looser monetary policy, supporting the labor market even if it meant even wilder, potentially destabilizing levels of speculative excess? In cycles like that, policy errors may have been unavoidable.

The good news for workers today, and perhaps why their optimism is higher than some economic data might suggest, is that there’s no reason why this labor market can’t continue for at least several more quarters. The excesses of the past couple years have been in financial markets, not in the real economy. Bubbles in cryptocurrencies, cannabis and private technology companies should not lead to a heavy-handed response from the Fed. Household leverage remains low, and business investment remains modest.

In 2019, a labor market with an unemployment rate below 4 percent and slightly higher wage growth may not be enough to satisfy those who are fixated on the economic performance of 1999. But most workers would probably take it.