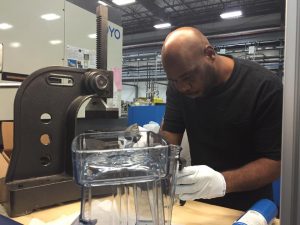 US manufacturers had a strong start to the fourth quarter and are looking forward to the end of the presidential election, according to Markit Economics’ preliminary report on the sector for October.

The flash purchasing manager’s index (PMI) rose to 53.2, Markit said on Monday. The index is based on a survey of manufacturers, and the “flash” reading is based on 85% to 90% of all responses collected every month.

Economists had predicted that the PMI was unchanged at 51.5, according to Bloomberg. A reading above 50 indicates that the sector is still in expansion.

“Both output and new orders are rising at the fastest rates for a year amid increasingly widespread optimism that demand will pick up again after the presidential election, which has been commonly cited as a key factor that has subdued spending and investment in recent months,” said Chris Williamson, chief business economist at IHS Markit, in the data release.

Manufacturing production increased for a fifth straight month, and new export orders improved from September. The rise in unfinished work due to backlogs was the most in a year. Also, companies said there was more capacity pressures at their plants, partly because they had slowed the pace of hiring.

The manufacturing sector has not yet fully recovered since the dollar’s rise and weak global economic conditions crushed demand for US goods last year.

In September, the PMI rebounded from a contractionary reading of 49.4 — the first slip into that territory since February. Some respondents to Markit’s survey reported a rise in domestic and international sales, with some customers buying ahead of anticipated price increases.

Manufacturing has been a hot button topic in the presidential campaign. Republican nominee Donald Trump has repeatedly said the US does not make things anymore, and has vowed to bring back manufacturing jobs from Mexico and China.

It’s worth noting that manufacturing now makes a much smaller contribution to the US economy compared to the services sector, where two-thirds of all activity takes place.

This piece was originally posted by Business Insider.